Who Let the Dogs Out - Baha Men 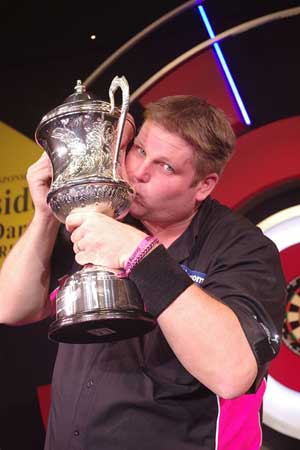 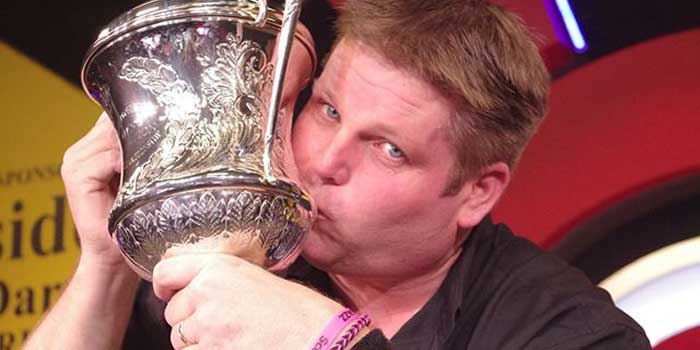 I've always watched Lakeside week, as a family, some at home with mum dad and brother Ryan and some with my nan and grandad when the weekend afternoon coverage was on. Mum and Dad would play when they went around friends in those days so there was always a board and darts laying around at home. So Ryan and I would prop the board on a chair an basically beat up the chair or wall and hit everything except the board. we put holes in a really smart vinyl sofa too! As we got older we played 101s using calculators to hold our scores. We got banned one time because Ryan lost to me and as I took my dart out of double 10 he lobbed his dart into my leg so hard the barrel was under the skin.

Later at about 16, I started going to the local pub to play. The New Queen at Avon. (There isn't a dart board there now). Whilst playing one night a gardener who lived up the road from the pub came in and asked if one of us young lads would like his darts. He thought it was a waste them just being sat at home, and because he knew we didnt all have our own darts. He had paid 2 weeks wages for these tungsten darts back in 1960. His wife threw him out of the house and he slept 2 nights in the shed after an argument over the cost of them. My friend said I'll have them and I said I dont have any so I will. Don just wanted them to be used, which they still are !! (if he was still here I wonder how he would feel now) A young fella with a full head of hair asked me to throw his darts into the board, they went all over the place and he said welcome to my team. "But Trev (Chant - Ex Dorset County Player) I'm not very good". "You have good solid style and if you play more you will be." He signed me on for his team, The Young Farmers, in the Thursday night Hants and Dorset League. My 1st game was away v SOUTHERN PRINT which was a club opposite what was Wessex bowl, now a Lidls. That was January 1987. A couple of months later I hit my 1st 180 at Parkstone Trades and Labour club (Who still play in the Hants and Dorset League).

The New Queen at Avon

September 87 saw me join the Ringwood League Div 3, with the New Queen B on Mondays, which my godfather ran. Some crazy nights out with his 2 sons Malc an Rich and my future best man Wayne attracted me to the game more. Added to the Thurs with Trev, Allan, Shitty Shuter (he drove tractors and spread muck) Duncan and Turbo Arse Ben, the darts was not the reason I went really. I went on to win my 1st trophy that year and at the Ringwood League Presentation I was handed my trophy by Jane Kempster (now Moulsley, and still plays to an extremely good standard) I remember thinking I have just been kissed by a Dorset and England legend! (she kisses me every time I see her now). Still feels great !!! She's still a big hero of mine.

In late 1988 Trev said "we are going to a competition at the plummers arms in christchurch". I made it to the final and Trev said "you've done great to get to here, but you won't win the final! you're playing that little fella over there". "Don't worry Trev, I'll be fine and beat the midget." I was 2-0 up and ended up losing 3-2 and never got another dart at a double. I asked him what his name was, he said I'm Ricky Forward. That was the closest I've ever been to beating him to this day. He is still a Big "little" hero of mine. 20 years later I now play in the same team. Strange how darts works. In 1989/90, our team members had gone separate ways and 2 weeks before The Ringwood league was due to start, I had no team. Then a call from a guy who made me play darts to win. Ringwood legend Whistle Hayes called saying he wanted me to play for him. He had given me a hard time when we had met before, so I told him to get lost and put the phone down. He called again saying he really wanted me to play and I said no way and put the phone down again. The next night he phoned said this was last time he would ask, he told me he could teach me to play properly and win stuff, so off to the Hunters Lodge I went. Those guys taught me right away, nobody was bigger than the team and if you don't like it go somewhere else. He dropped me for the 1st game and Whistle said you didn't think we wanted you to play did you. We needed a chalker, those fellas taught me lots about playing for each other and you win lots more for your team. We won the league there many times and a few times when we probably wasn't the best team. 20 years on I've found that to be the case.

Mick Randell gave me my break in the Dorset Superleague with St Ives in which I still thank him when I see him. I played with Whistle there too. We played in leagues all over Salisbury Ferndown Christchurch Wimborne Fordingbridge Verwood Blandford and Premier money league at Branksome. Nick Wilson, Kev Sargent and Dave King were there along some of the way teaching me right from wrong in the etiquette of the game. Oh I did all the driving!

Whistle convinced me to play county for Dorset, which is where I still play. Every time I have represented a county in my life up to then it was for Hampshire. I met new people and great friends like Mark and Michelle Porter inside and outside of the darts circle. (they my drivers) ha ha !!! Really struggled with whole county thing at the start. Still do at times. You never know what can happen up on that stage. You can only hope you play just well enough. Back to old saying, if you think your bigger than the team you may get away with it for so long but eventually you get shot down up there. It is a great place to play your darts.

Official Trailer - Miss Peregrine's Home for Peculiar Children
Scott features in the film for 30 seconds in a pub scene, the Lakeside semi final between Scotty and Jeff Smith is shown on tv in background !!!

IMDb - London Fields (2016) Trivia
Scott acted as a darts consultant during the making of the movie.

Scott Mitchell joins Paul 'Behind the Bar' 23/2/2017 on YouTube
On location in Torquay Scott reflects on the Dutch Open including a clash with BDO World Youth Champion Justin van Tergouw, plus Paul chats to dart events organiser Nathan Fleming.

BDO Beat with Scott Mitchell 18/8/2016 on YouTube
Scott Mitchell joins Paul Starr on the 'BDO Beat' and talks Channel 4, county and looks ahead to The Grand Slam